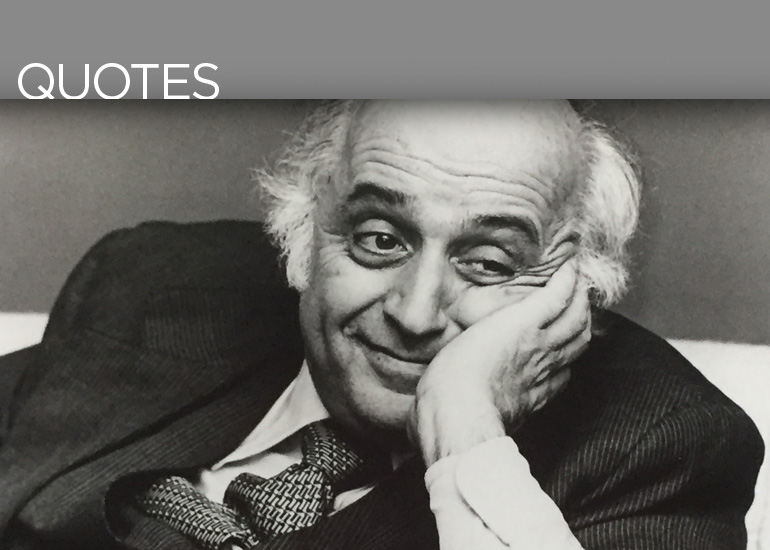 THE WORDS AND WISDOM OF RABBI ALEXANDER SCHINDLER

Rabbi Alexander Schindler was president of the Union for Reform Judaism (formerly the Union of American Hebrew Congregations), the governing body of Reform Judaism, from 1973 to 1996. Among his many accomplishments he served as chairman of Presidents of Major American Jewish Organizations.

How could it be thus, that all which animates life — the capacity to know, to create, to love, to dream — that all of this could be snuffed out like a guttering, sputtering candle, leaving not even a shadow?

Too many of life’s own ways — the reawakening of spring after the death-like winter, the miracle of birth from the inner space of our bodies, the constant transformation and exchange of all matter and energy, the notion of a “curved” universe — all of these and more testified against the likelihood that death could mean obliteration rather than transformation.

I don’t know why they keep on calling them neo-Nazis. They are the same old Nazis…malicious…ruthless cold-blooded killers!

On Being a Jew

To be a Jew in one’s mind or heart is not enough. The pure idea can serve only a few rare individuals theologians, philosophers if you will. The truth — to be felt by most of us – must put on a garb. There must be rite, legend, ceremony…visible form.

While routine religion suffices to sustain our lighter hours, once life runs out into its depths why, then, we need a different faith.

When death takes those we love, when our children slip through our arms, when dread disease makes waste our strength, when we think or even say now I have reached the bottom of the morass, now I can sink no deeper…and yet we sink deeper, why, then, we need a deeper faith.

Then we need the kind of faith that led the Psalmist to exclaim: “Gam ki elech begey tsalmoves lo iro ro ki ato imodi – Yea, thou I walk through the valley of the shadow of death, I will fear no evil, for Thou, Thou art with me.”

Consider the world of the invisible, if you will. Ideas, for example…they are impalpable. No one can see or seize them. Yet ideas can seize us and they hold the power to transform our lives. Ideals too are of such a kind. They are intangible, yet what is life without them?

To be without health insurance in this country means to be without access to medical care. But health is not a luxury, nor should it be the sole possession of a privileged few. We are all created b’tzelem elohim – in the image of God – and this makes each human life as precious as the next. By ‘pricing out’ a portion of this country’s population from health care coverage, we mock the image of God and destroy the vessels of God’s work.

Once again, a sacred hour of remembrance summons us to these time-hallowed halls.

Not that we really need such an occasion lest we forget. We need no reminders.

We remember too well. Memories come…to interrupt our sleep…to still our laughter… to fill our silence with the voices of the past.

Oh, would that we could forget. But quick forgetting is not the reality of a people who lost one third of their number in half a decade; who lost one and one half million of their children, during those tear-stained years.

No, we cannot, we will not, forget these martyrs — all those who perished through the cruelty of the oppressor. Not punished for any individual guilt, but indiscriminately, men and women… the aged and the young… the learned and the simple… were driven in multitudes along the road of pain and pitiless death.

They lie in nameless graves. Their places of everlasting sleep are not known to us. Yet we will not forget them. We take them into our hearts and give them a place beside the treasured memories of our own beloved.

May their remembrance give us the strength to turn from death to life, to love where others hate, to hope where others despair, to retain our belief in humankind and in the conviction that, in spite of everything, there is meaning in life and in human history.

Thus will we give substance to the words of our tradition, those words which we repeat six million times — and more. Yitgadal, v’yitkadash sh’mey rabba… Magnified and sanctified be thy Name of God.

Wherever there is a Jewish community which is embattled, our help will be forthcoming.

We will survive, let there be no doubt about it, even as we survived in the past, over and over again. Twenty years ago Look Magazine spoke of the vanishing American Jew. Well, Look magazine vanished but we live.

Not soon thereafter Life magazine also predicted our eventual demise. Life survives in but a truncated form whilst the American Jewish community continues to grow in strength.

I hold in my hand a coin which was minted in the days when our ancient homeland was conquered by the Roman centurions. On its face the following words are inscribed: Judea est perdita…Judea is destroyed… the Jewish people is no more. Well Rome fell and remained fallen, but the Jewish people did not.

When I once rode with the President to his Temple on the occasion of the Temple’s anniversary, he assured me that the sanctuary would be filled to the overflowing.

When I asked him how big his sanctuary was, he replied: “Oh, Our Temple sleeps well over 500.”

Life’s losses are compensated by gains. We grow only by losing and leaving and letting go. Indeed, we can draw our first breath only by leaving the warmth of the womb.

We can widen the horizons of our mind only once we leave the comforts of home to begin our school lifer. We can establish our independence only once we are prepared to shed the safety of academia. Human development is paved with renunciation.

Throughout our lives we grow by giving up. Life is never just a being. It is always a becoming, a relentless flowing on. We move through the various stages of life, as Shakespeare had it, each with its entrances and its exits, the infant becomes the boy, the boy the man, and there simply is no turning back.

“We must remove the “not wanted” signs from our hearts. We are opposed to intermarriage but we cannot reject the intermarried. And we cannot but be aware that in our current behavior we communicate rejection. If Jews-by-choice often feel alienated by our attitudes and behavior, how much more alienated do the non-Jewish spouses of our children feel? …I believe that it is time for our movement to launch a carefully conceived outreach program aimed at all Americans who are ‘unchurched’ and who are seeking roots in religion.”

Presentation to the UAHC Board of Trustees
December 2, 1978, Houston, Texas

What purpose outreach, pray tell, if those who enter find nothing within.

There simply is no denying it, even we who call ourselves religious reform Jews, even we are not sufficiently disciplined in our observances. As liberal Jews, we assert our autonomy, we insist on the right to choose. But all too often we choose nothing at all, or choosing something we observe it only haphazardly. We saunter in, we saunter through, we saunter out.

The Talmud called it the place “where heaven and earth kiss,”

The Zohar called it “an earthly copy of the heavenly original.”

And, I, I simply wish to call it home.

It is a foremost task of the synagogue to remind us of those values which the world makes us forget. Within its sacred walls we must always be confronted with the ideal and summoned to measure ourselves against it. Its doors must always be open wide,

so that those who require sanctuary will feel free to enter. Its windows must never be shut so tight that humanity’s weeping will go unheard.

This is the challenge to the Reform Synagogue: to uphold and to transmit Reform’s unique and passionate recognition of Judaism as a living faith. For us, Judaism is a flowering plant: not merely a tangle of roots but an organism that draws nourishment from those roots; not only a bare stem, but a firm and flexible stem full of sprouts and buds; not only a flower fast to wilt and fade, but a plant that flourishes anew in each generation.

Daily, in the circle of our family and friends, we encounter untimely deaths, unexpected blows, unsuitable matches, unfulfilled dreams… And yet, by gathering our heartaches together into a house of worship, we find something transformative happening: our sorrows become windows of compassion. Paths through the wilderness, hewed and marked by past generations, give us our bearings. Patterns of meaning and significance emerge. We are moved from self-pity to love.

Our individual heartbeats merge with the pulse of all humankind. Suddenly, we are no longer trembling like a separate, uprooted reed…

In the synagogue, if we stand and pray, “the Holy One listens” — so the Jerusalem Talmud tells us — even as a friend in whose ear one whispers a secret.”

Members of small congregations know how to make spiritual the most humble meeting house. They understand that it is prayer and not architecture that makes a place holy.

The synagogue was our home when we had no other home. It was our land when we were wanderers over the face of the earth. Within the synagogues sacred walls we were able speak the proud language of our faith, even while elsewhere we were forced to voice the babble of many peoples. Here our forbears could straighten their bent backs and hold their bloodied heads high for here they could feel themselves to be what indeed they were: princes of God, proud scions of God’s people.

Yet is it really time that flies? Is not time, like space, an aspect of infinity? It was, it is, it will remain. It mocks all of our efforts to encompass it, with our feeble instruments, our clocks and calendars, with their petty markings of hours and of seasons.

No, time does not fly… We fly. Our journey through time is a flight, and it is speedily gone.

Unless we open all our pulpits to women and remove all obstacles to their advancement, their ordination will remain but a symbolic recognition.