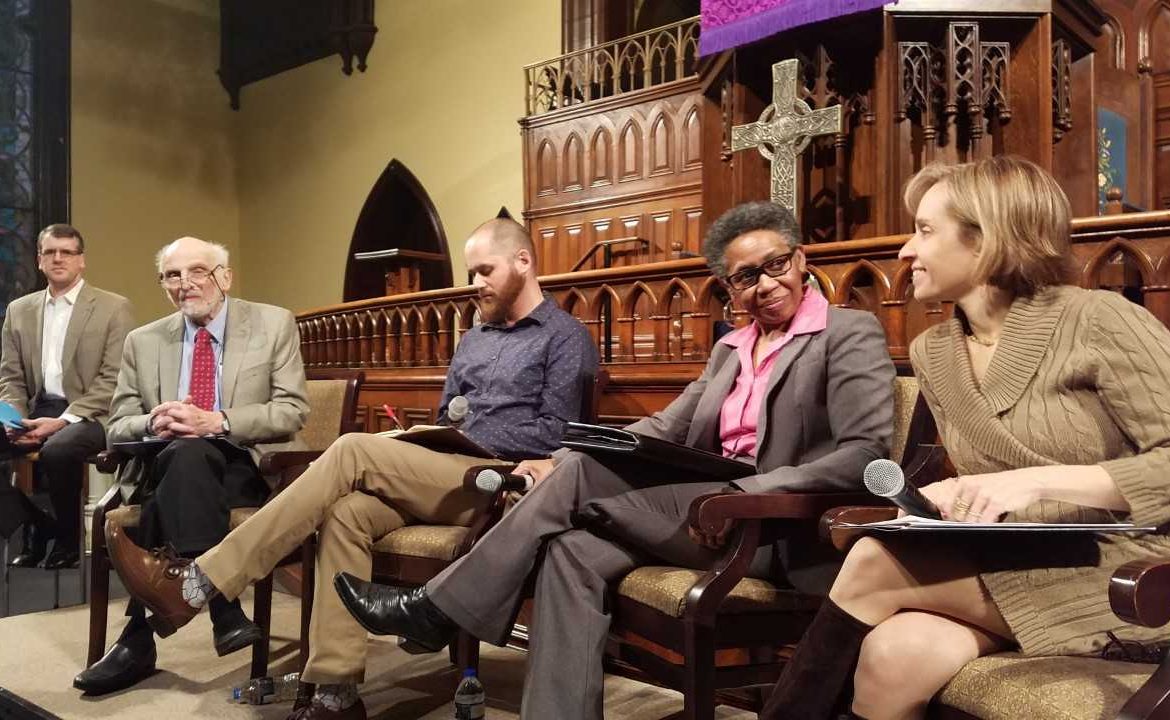 by Judy Schindler and Jake Sussman

[This was given in response to a presentation by Dr. Walter Brueggemann entitled “God. Money. Neighbor.” delivered at First Presbyterian Church in Charlotte, on March 4, 2018.]

Dr. Brueggemann, we appreciate your clarion call to communities of faith to bring the value of loving our neighbor into our community’s policies and systems.

It is often said that we have two Charlottes, in one Charlotte are the citizens whose wealth is steadily increasing and in the other are those living in poverty struggling to pay simply for food and shelter. We are a city segregated by race and poverty.

The protests our city saw in the fall of 2016 reflected this reality.  The police in riot gear forming walls against the protesters is an image that captures the system upon which I want to reflect – the criminal justice system. Just like the famine in Egypt in Genesis and like King Solomon’s building an elaborate Temple, both of which imposed extreme taxes upon the poor to make the building projects of the rich succeed, we can see in Charlotte oppressive policies within our criminal justice system.

Today, a significant number of those in our Mecklenburg County jail awaiting trial – who remain innocent until proven guilty — are there not because they are dangerous but simply because they are poor. They cannot afford to purchase their freedom. Instead, they are told that they must pay a certain amount of money in order to be released before their day in court, without any regard to their ability to pay. Even a few days stuck in jail has disastrous consequences: people lose housing, jobs, or child custody. Every study of the cash-bail system makes clear that this policy doesn’t make us safer. It merely plays on base emotions of fear and simple solutions for complex problems. And almost exclusively hurts the poorest among us.

This extractive economy is also manifest in how we choose to underfund our entire justice system.

Even before the start of the Great Recession, in 2007, North Carolina ranked 49th out of 50 states in terms of per capita spending on our judicial branch. Five years later, in 2012, we ranked 45th out of the 50 states.[1] We continue to rank embarrassingly low on funding our third branch of government. And this self-imposed scarcity of funds for our judicial system has, not surprisingly, resulted in the scarcity of justice

Without sufficient funding, we underpay judges, prosecutors, public defenders, clerks, and the entire infrastructure of our justice system. Rather than commit to these necessary costs, we extract burdensome court costs, fines, and fees from the poor. We saw this uncovered in Ferguson, Missouri, after the Michael Brown shooting, where fines and fees were so “generously assessed and aggressively collected” that they “covered more than 20 percent of the city’s general revenue fund.”[2]

We do the same thing here. The majority of people who enter the Mecklenburg County courthouse tomorrow and on any given day are mostly poor people dealing with traffic tickets, low level criminal offenses, divorces, and child custody matters. And at every turn, we seek to extract fines, fees, and costs from them. These funds aren’t used to make us safer. Instead, they are simply used to keep the system running. In essence, we are forcing the poor to pay for the justice they, and we, receive.[3] This has been going on for too long, sometimes in the most banal yet pernicious ways. A 2009 study found that in response to a 10 percent budget shortfall across the state, there was a 6 percent uptick in the issuance of traffic tickets 4 —another example of the justice system being used as a tool to raise revenue, largely on the backs of those without power.

[There are other models, a 2015 Council of Economic Advisers Brief to the Obama administration notes, “Over 25 countries in Europe and Latin America utilize progressive “day” fines instead of fixed fines of a certain dollar amount for a given offense. In a “day” fine system, judges use sentencing guidelines for offense types measured in a number of “days.” Then, the court determines the total fine by multiplying the number of “days” by an individualized income measure for the defendant. Often, the “day” value for a defendant equals the dollar amount he or she earns in day, allowing fine punishments to be equally punitive in terms of days of work across defendants of different means.”5]

Dr. Brueggeman, the fabricated notion of scarcity of which you speak is alive and well in our Queen City. So many Charlotteans are fearful when it comes to finances. So many have been conditioned to have a hunger that will never be satisfied leading them to regressive and extractive practices.

Lynne Twist in her heart opening book on charity called The Soul of Money suggests that we need to embrace “the surprising truth that there is enough, we have enough, we are enough…” Moving from an extractive to a neighborly economy is about creating a culture not of “you or me” but of “You and me – we.”

[3] Michael Gordon. “His sentence carried no jail time. So why did he keep ending up there?” Charlotte Observer, November 11, 2017, http://www.charlotteobserver.com/news/politics-government/article183866506.html