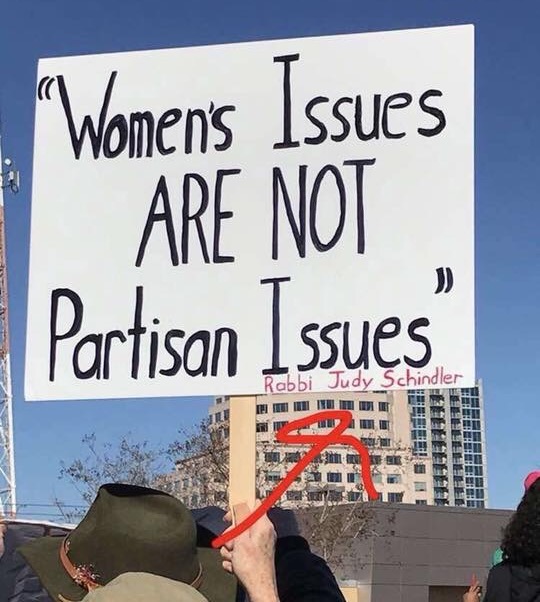 Marching is not enough; women need a movement

[From the Charlotte Observer, January 17, 2018. Rabbi Schindler is a Contributing Editor for the Observer Editorial Board.]

“Close your eyes – take a minute to imagine a world four years in the future – in 2021 – one in which our movement has won.”

Last year, the groundswell of discontent connected our Queen City to women worldwide. More than 10,000 women and men flooded the streets of Charlotte holding signs with catchy slogans, wearing pink pussyhats and finding inspiration. They joined the more than 3.5 million people marching in 914 cities across the globe.

In the year since, women’s activism has skyrocketed. The #metoo movement has toppled powerful men in Hollywood, the media and government. Fifteen women in Charlotte-Mecklenburg were newly elected to office. Nationally, hundreds more women are joining the ranks of political candidates.

Yet how do we definitively transform our marching into a movement for sustainable change?

Building a sustainable movement requires clear strategies. Last year, millions marched in opposition to an election. This year, millions will march in defense of basic rights and for specific policies: freedom from violence, access to health care, reproductive rights, equal opportunity and pay. Including issues faced by women across racial, ethnic, and socioeconomic lines is an essential component of creating a collective agenda.

Those of us committed to equality can set a goal of 50 percent women’s leadership by 2025 and work tirelessly to get there. We can recognize our sources of power – from purchasing to hiring to voting to philanthropy. Let us reward companies with best practices as we shop. Let us boycott businesses that fall short until we see our desired change. Let us share our research on social media and use any connections we have to influence decision makers.

Building a sustainable movement requires the creation of allies. The Civil Rights Movement had white allies. The gay marriage movement had straight allies. The Women’s Movement needs to nurture male allies who have a deep investment. Many of us would love to see more men at Saturday’s march carrying their own signs: I am a man fighting for women’s rights; This is what a feminist looks like; I march for my mom, my daughter, my sister.

Building a sustainable movement entails addressing power structures of all kinds. Building a movement requires a cultural change – where calling out the objectification of women is commonplace and having women’s safety, representation and equal pay as an expected norm.

Building a sustainable movement necessitates hearing voices across party lines. Women’s issues are not partisan issues. Being anti-Trump is not a platform.

While marches inspire and energize us, they are not enough to sustain a movement. A new friend, Rev. Emma Jordan-Simpson, told me last week, “Resistance is not an event. It is a way of being engaged.”

Our imagining 2021 can become a reality when we not only recognize the power we have, but commit to becoming catalysts for change. Then our marching this Saturday from First Ward Park to Romare Bearden Park (speeches at 10 a.m., marching at noon) will truly reflect our movement – a sustainable Women’s Movement.