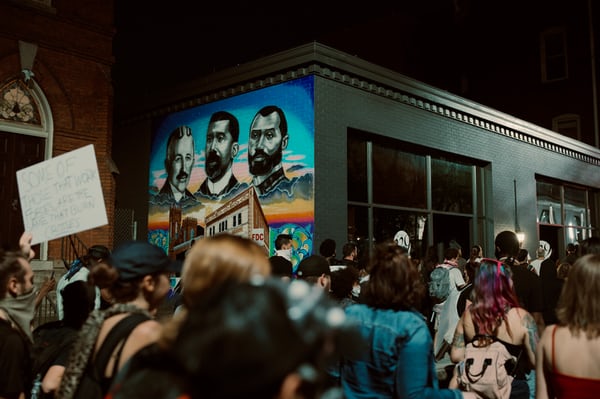 The soil on which we stand

This talk was delivered at the Restorative Justice Two Year Reflection at Little Rock AME Zion in Charlotte, NC, August 22, 2021

Thank you to Dr. Walker for hosting us. Thank you Dr. Keaton for leading this organizing effort, this organization Restorative Justice CLT, and this movement for justice. Dr. Keaton asked me to talk about this work from a Jewish perspective so I wrote this piece called “The Soil on Which I Stand.”

I think a lot of about the soil on which I stand.

In the book of Exodus, Moses was married, building a family, and comfortable as a shepherd in the wilderness of Sinai, when God called to him out of a burning bush and said, “Take off your shoes, for you are standing on holy ground.”

And God called Moses to leave his place of comfort and to fight the fight for freedom, justice, equality and humanity that needed to be fought.

All of us right now are standing on holy ground that calls to us to continue the fight for justice.

It is on this holy ground that we met two years ago to this day for our first listening session to hear the harm caused by our city’s urban renewal.

This church, Little Rock AME Zion is holy ground. Established in 1884, its pews have seen pain and exultation.

This church, Little Rock AME Zion is holy ground. It was once surrounded by a thriving neighborhood of Brooklyn – with home ownership, with Black businesses, with a Black Wall Street.  It still stands as one of two of Brooklyn’s church buildings to remain, despite the 1960 City Council decision to bulldoze most of what surrounds it.

“Root Shock” is a concept Dr. Pamela Grundy taught us about this year — the thesis and work of researcher Mindy Thompson Fullilove. “Root shock” describes the devastation of urban renewal – our nations’ decades-old policies to disinvestment from Black communities.  “Root Shock” is a biological process when you take up a plant and replant it and it cannot create a root system extensive enough to be sustained.

The historic Black community of Charlotte’s Brooklyn was never given time or place or space or resources to fully reestablish its roots.

We have a lot for which to atone.

I think a lot about the soil on which I stand… the soil of American Indian tribes.

We have a lot of which to atone.

I think a lot about the soil on which I stand… the soil of Queens University of Charlotte where I work.

It was built as a white women’s school in 1857 by Presbyterians. The first President, Robert Burwell, was a slave owner – one of whose slaves Elizabeth Hobbs, bought her freedom and later published a memoir documenting Robert and Margaret Anna Burwell’s harsh and brutal treatment.

While today, Queens has a growing and thriving population of students of color, we still have a lot of work to do and a lot for which to atone.

I think a lot about the soil of the Myers Park neighborhood where I work.

A place where many homes had (and likely still have) restrictive covenants specifying to whom the property can be sold. While not enforceable for seven decades, the deeds stated that the houses could not be sold to African Americans, and in some cases, could also not be sold, to Asians, Latinos, and Jews.

We have a lot for which to atone.

I think a lot about the soil on which my family once stood.

My father was born in Munich.  His parent’s land, their home, their money, was stolen from them and a large number of the people on my family tree were murdered. My namesake Judy Schindler, my great aunt, was murdered — shot in Riga alongside her husband and five children ages 2 to 10.

“Blood and soil” the Nazis chanted in Germany and Austria and Poland and more as they conquered country after country seeking to make all of Europe Aryan.  A fictitious pure Aryan blood needed “living space,” leaving millions of refugees and millions of victims of mass extermination in their wake.

“Blood and soil” white supremacists chanted in Charlottesville.  A mythic pure white blood – where people of color and Jews do not belong.

I do this work as a Jew not only for my brothers and sisters of color, but for myself.

I do this work because like my siblings of color, I have experienced intergenerational trauma caused by persecution.

I do this work because a central pillar of Judaism is justice. From Abraham to Moses to Isaiah, the pursuit of justice is foundational. I stand on soil from which I have benefited as a white person and caused harm as a white person, even as I have suffered as a Jew.

How can I atone? How can we atone?

By working to turn oppressive soil into holy soil — admat kodesh in Hebrew.

As Moses stood on holy ground, so do we stand on holy ground that calls us to atonement and calls us to justice. Our job is to transform the system of white supremacy, where whites hold the money and power and keys to justice and grant making and policy making, into one of equity and equality, where all have access and opportunity.

What does that atonement require?

The Medieval philosopher lays out the three steps to guide our work.

Step 3 – systemic change, not repeating systems of racism and cycles of racist policies but dismantling them.

The Jewish world prepares for atonement.  In just two weeks from tomorrow we will welcome a new Jewish year. Each day of the month preceding, we blast a ram’s horn as a wake up call for repentance. A self-reckoning is required.

For us today, a Charlotte reckoning is required.

Like Moses, we stand on admat kodesh, holy ground, that calls us to listen, that call us to atone – through truth telling, through repair, through change.

Blowing of the shofar.