The Syrian Refugees and Germany: Not Their Story but Our Story 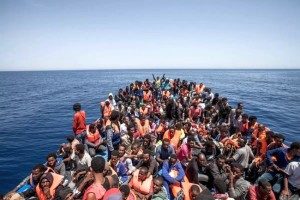 Each of us had different reasons for taking part in the Central Conference of American Rabbis Mission to Berlin. Among them were:

The architecture of the Jewish Museum in Berlin created a fitting metaphor for my personal renewed engagement with this country that stole my father’s childhood and a significant portion of my family tree. The architect, Daniel Libeskind, designed the Jewish Museum of Berlin upon three underground axes reflecting the three life paths German Jews may have taken. One path led to a “Holocaust Tower” — an empty concrete silo where the only light and warmth comes from a small slit above. A second path, the Axis of Emigration, led to “the Garden of Exile” which is a disorienting maze of stone pillars on uneven ground in an outside garden. The third and final path, the Axis of Continuity, intersects with the two other paths taking the visitor through exhibits capturing nearly two millennia of German Jewish history. Our coming to Berlin was a collective commitment to be a part of that third axis: the continuity of German Jewish life.

Last year, Chancellor Angela Merkel made the moral choice to open German’s borders to refugees from Syria and other Middle Eastern countries. They poured in by the tens of thousands swelling to more than one million. Germany quickly made makeshift shelters. We visited two shelters – one in an old city hall and another in a tobacco factory. Month by month improvements are being made but still the conditions are stark, cold and harsh. At the Wilmersdorf Shelter, there are 1200 refugees (half of them children) with 60 toilets and 30 showers. Some stay for five days, some for five months, and some have been there since the day it opened on August 14, 2015.

Patrick Kingsley, in The New Odyssey: The Story of Europe’s Refugee Crisis writes that “In a way, the refugee crisis is a misnomer. There is a crisis, but it’s one caused largely by our response to the refugees, rather than the refugees themselves.” Had all of the countries of the European Union shared the burden, absorbing the stream of migrants would be manageable. Had a system of resettlement been organized, chaos would have been curbed. Millions of refugees would not be stranded, despairing and overwhelming Jordan, Lebanon, and Turkey. Kingsley notes, “Fear of social meltdown was used to create inertia – fear that became its own self-fulfilling prophecy.”

In Berlin, we connected with refugees. We had meetings and meals with a variety of refugees from Syria, Afghanistan, and Iraq. We heard of their fears of turning in their passports and not knowing if they’d ever hold them again; of their anxiety of waiting for papers that would grant them refugee status or render decisions that could lead to deportation; of pleading before judges; of weeping that reunification with families (and in some cases children) seems unlikely in the near future; and some were questioning, “Is Germany where I should stay?”

The citizens of Germany are caring – one million Germans volunteer with refugees. The citizens of Germany are worrying – about the economy and about security. On one hand, the refugees are vulnerable as victims of exploitation or violence and, if integration is unsuccessful, they are vulnerable to radicalization. On the other hand, they can enrich German society as the birthrate is low, there is a labor gap and these refugees are highly educated.

IsraAID is strategizing and working hard. Integration of refugees is a critical concern. Programs are being created to maximize integration at community centers outside the shelters. Israeli Jews, Israeli Druze, and Israeli Palestinians are helping side by side. American summer college interns are building bridges of social support. Rabbi Gesa Ederberg of the Oranienburger Strasse Synagogue in Berlin, in reflecting upon the potential of her congregation’s engagement, notes: “Refugees need to reorient themselves. If, in this moment of reorientation, we can help reorient them to the idea of Jews and even perhaps Israel — that can be transformative.”

And we, as North American rabbis, have an important role, as well. We are players in this global narrative of creating sanctuary and safety for the Syrian and other Middle Eastern victims IMG_2311seeking refuge from war, oppression, murder, and in some cases, genocide. With education, with programs, with engagement, with advocacy, with fundraising, and with welcoming refugees into our communities and country, we can make a difference.