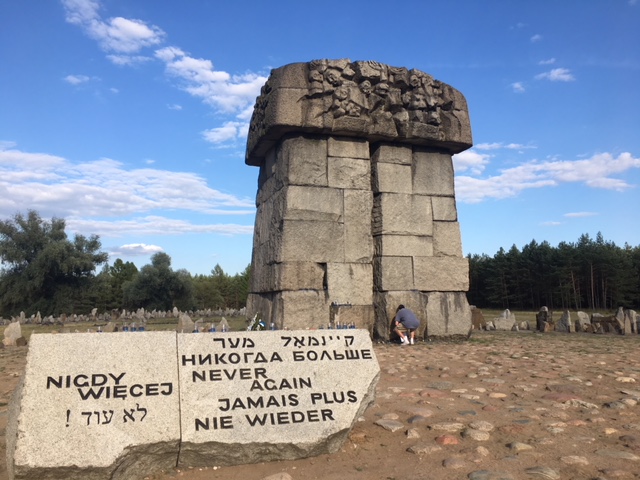 To Whom am I Accountable? The Answer I Found in Treblinka

It was the final day of a two-week journey to explore the Holocaust, a trip filled with long days of study, long drives, and long hours in concentration camps and death camps. I was with fifteen other Holocaust educators learning about Holocaust history, about best practices in Holocaust education, and about personal and collective responsibility and accountability.

It was day fourteen of being away. I was ready to leave Poland and get back to Charlotte and to my family. We had already explored deeply three concentration camps (Ravensbruk, Sachsenhausen, and Bergen-Belsen) and three death camps (Auschwitz-Berkenau, Belzec, and Majdanak). There were times when the line between them was difficult to discern. At all of them, people experienced forced labor, starvation, dehumanization, and overwhelming death. Some of them were built for the sole purpose of death, aiming to murder the greatest numbers of Jews in the most efficient way. Treblinka was our final stop. We sat on the bus all day, driving first to the forest of Tykochin (where all the Jews of a village were marched out of their shtetel and shot) and then on to Treblinka. I was hungry, tired, and angry, and my fatigue left me with limited capacity for focusing my attention on what our passionate and learned guide had to say.

Why did we need to drive so far and with no time to stop for lunch as we had been promised?

The hours were ticking away and we’d be arriving so late to the airport hotel for a final meal and little moments of sleep before a 4 am wakeup. Hadn’t we seen enough? Why did we need to see yet another death camp?

But then I walked amid some of the 17,000 thousand stones for the 17,000 souls who met their deaths at Treblinka, and my anger turned to grief. There in front of me stood 17,000 stones, plus 130 more bearing the names of the 130 cities or villages where the victims had once lived. It was a symbolic cemetery.

We said a final Kaddish weaving together the names of all the places we’d visited.* I walked out of Treblinka with tears in my eyes, guilt at the act of leaving, and a weight of responsibility. In that moment, I understood: I am responsible for keeping alive the silenced voices of millions of children, mothers, fathers, and human beings whose lives had been murdered by the Nazis.

To whom am I accountable? To humanity and to God. What does that responsibility entail? Calling out injustice and working to right acts of inhumanity when I see them.